Virtualization is touted as central to helping IT organizations optimize and secure application performance in a cost effective manner, but it can also present its share of application delivery challenges.

In this discussion, based on the 2009 Application Delivery Handbook, we examine the impact of virtualization on application delivery and performance.

One observation that can be drawn from the preceding definition is that virtualization is not a new concept, because VLANs and VPNs have been widely deployed for well over a decade.

Figure 1 shows how Ethernet Networking I/O is typically virtualized by VMM software. The VMs within a virtualized server tend to share a conventional physical Ethernet NIC (PNIC) to connect to a data center LAN. The VMM provides each VM with a virtual NIC (VNIC) and creates a virtual network to provide the connectivity between the VNICs and the PNIC. This virtual network is based on a virtual switch that is often referred to as a vSwitch. 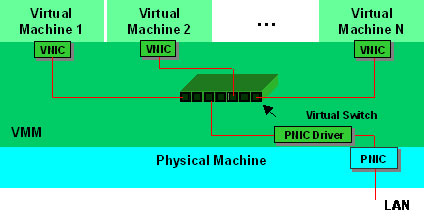 In the traditional environment consisting of physical servers connected by a physical switch, IT organizations can get detailed management information about the traffic that goes between the servers from the physical switch. Unfortunately, that same level of management information is typically not provided by a vSwitch. The resultant lack of visibility into the traffic flows between and among the VMs on the same physical platform affects security, performance monitoring and troubleshooting.

The potential also exists for IT organizations to combine too many VMs onto a physical server. This can result in performance problems caused by factors such as limited CPU cycles or I/O bottlenecks that result from oversubscribed physical NICs. These problems can occur in a traditional physical server, but they are more likely to occur in a virtualized server because of the consolidation onto a single physical server of multiple VMs, all of them contending for scarce resources. As a result, management tasks such as performance management and capacity planning are more important in a virtualized environment than they are in a physical environment. This means that IT organizations must be able to continuously monitor in real time the utilization of both physical servers and VMs. This capability allows IT organizations to avoid both over- and underutilization of server resources such as CPU and memory and to allocate and reallocate resources based on changing business requirements. This capability also enables IT organizations to implement policy-based remediation that helps the organization to ensure that service levels are being met.

Another challenge created by the deployment of virtual servers is that IT organizations now have to manage VM sprawl. The phrase VM sprawl refers to the proliferation of VMs combined with the IT organization's lack of visibility and control over the VMs. In addition, most vendors of server virtualization provide the ability to move VMs quickly and easily from one physical server to another. This ability is a classic good news/bad news situation. The good news is that this ability contributes to resource agility, high availability and energy efficiency. The bad news is that it can be challenging to ensure that the migrated VM retains the same security, storage access, and QoS configurations and policies. Keeping all the required configurations synchronized requires linkages among the management systems for physical and virtual servers, network devices and storage.

There is no doubt that virtualization creates some application delivery challenges. There is also no doubt that virtualization helps IT organizations deploy techniques to optimize and secure application performance in a cost-effective manner. For example, just as devices such as servers can be virtualized, so can appliances such as WAN optimization controllers (WOCs). A virtual appliance is based on network appliance software, together with its operating system, running in a virtual machine in a virtualized server. Virtual appliances can include WOCs, application delivery controllers (ADCs), firewalls, and performance monitoring solutions, among others. A virtual appliance offers the potential to alleviate some of the management burdens in branch offices because most of the provisioning, software updates, configuration and other management tasks can be automated and centralized at the data center. Of course, virtualized appliances create their own set of challenges. For example, just because the software is capable of running in a VM does not necessarily mean that it performs well in that environment.

This discussion of the emerging applications delivery challenges will be continued in ashtonmetzler.blogspot.com/.

About the author:
Dr. Jim Metzler, Principal at Ashton Metzler and Associates, is a widely recognized authority on both network technology and its business applications. In more than 28 years of professional experience, Jim has helped numerous vendors refine their product and service strategies and has helped enterprises evolve their network infrastructure. He has directed and conducted market research at a major industry analyst firm and has run a consulting organization. Jim holds a Ph.D. in numerical analysis from Boston University. He has co-authored a book, published by Prentice Hall, entitled Layer 3 Switching: A Guide for IT Professionals.