You have probably already heard that there are tons of excellent open source network analysis tools and utilities for the taking. You probably heard that these tools are free and are, perhaps, just as good as more expensive commercial tools. Chances are that -- like many of us -- you didn't go much further than that.

I suspect that you probably never downloaded these tools or took the time to try them out. And, in your mind, you probably had a lot of justifiable reasons for not doing so. In this article, I will do my best to convince you to try one of these tools today and show you how easily it can be done. For most companies, the time spent testing open source network tools can be justified by the potential cost savings over their existing tools alone. When you compare, say, Open NMS's cost -- free -- with the $10K+ potential price take of HP Openview, it becomes a "no brainer" for most organizations.

Several common misconceptions may have kept you from trying out open source network management tools:

It really doesn't take long at all to try out many of these tools. I will show you how to make this demo very quick (so that you can't say you don't have time), I will recommend only the most "tried and true" tools (so that they are reliable), and once you see these tools, you will discover that they are fully featured, production-ready applications, many of them running on -- or interoperable with -- the Windows OS.

Using VMware to make the demo quick and painless

Today, trying out open source network management tools can be quick and painless. Most of the more popular tools are available with simple interfaces for downloading so that you don't have to compile them manually.

For smaller tools, like UltraVNC or Wireshark, you can simply download and install them. If you are concerned with doing that on your own PC, why not do it inside a VMware Server Virtual Guest OS? That way, you can take a "snapshot" before the installation and then you can revert to that snapshot after testing if you don't want to keep the application.

For larger packages, where the installation time and the potential for complex configuration is holding you back, you can download VMware Player (free of charge) and then download pre-configured, pre-installed versions of the application inside a VMware Guest OS. You would do this from the VMware Virtual Appliance Marketplace.

Perhaps you have been one of those network admins who said that they didn't have time to test out these open source networking utilities.

I propose you try out an open source network protocol analyzer in less than five minutes. That tool is Wireshark.

Wireshark is the replacement for Ethereal – the open source network protocol analyzer. I downloaded Wireshark, free of charge, from the Wireshark website; I installed it and had it running in less than five minutes. Even better, I used it inside a VMware Player Guest OS so that I can get rid of it if I don't like it, and to ensure that it doesn't destabilize my regular desktop OS. Where you install it is, of course, up to you.

Here is a screenshot of my Virtual Windows machine running Wireshark, sniffing my local LAN adapter (for my host and all virtual guests). 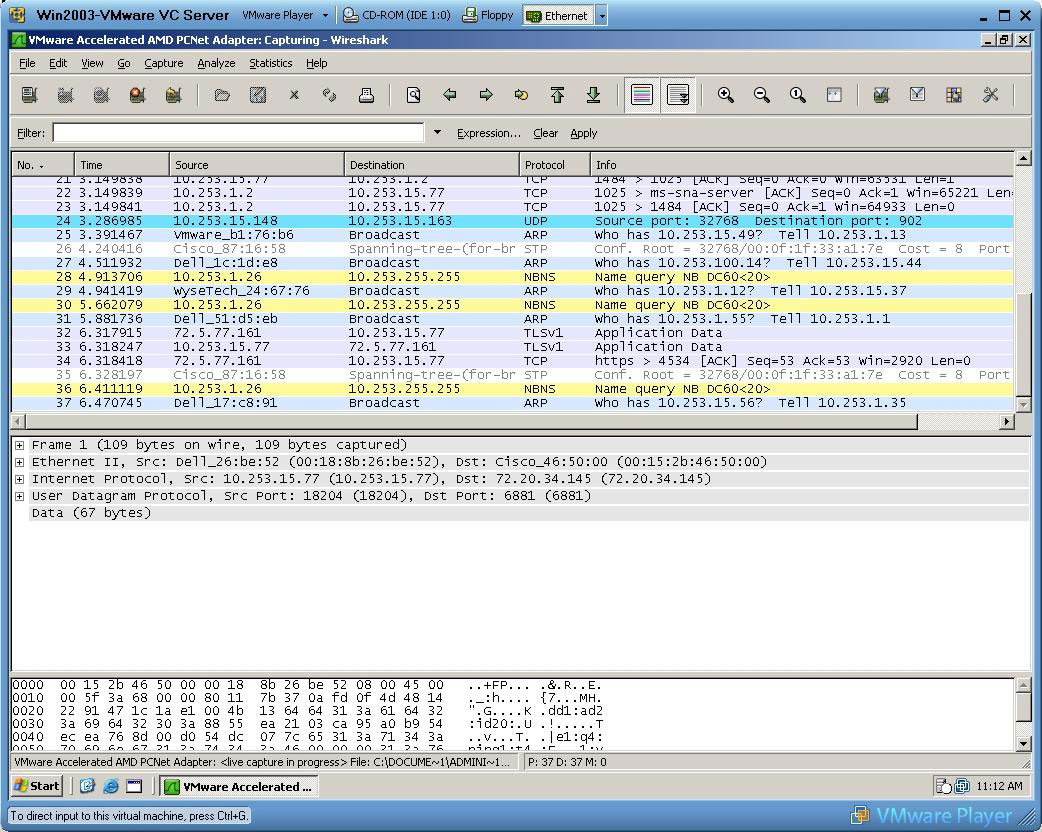 If you have already tried these tools, here are some other recommendations:

Many of these are also available from the VMware Virtual Appliance Marketplace.

In the next tip, I'll demonstrate using another open source network tool, when I show you how to configure Cacti to monitor your core router.

About the author:
David Davis (CCIE #9369, CWNA, VCP, MCSE, CISSP, Linux+, CEH) has been in the IT industry for 15 years. Currently, he manages a group of systems/network administrators for a privately owned retail company and authors IT-related material in his spare time. He has written more than 100 articles, eight practice tests and four video courses and has co-authored one book. His website is HappyRouter.com.