By
Return to Part 1

What is a kernel?
In essence, the kernel is the Unix/Linux operating system. The kernel controls the hardware, I/O, memory management, system and user processes. On whole, it manages all the critical aspect of the computer necessary for operation. Applications, such as shells, services like sshd, text editors and the like all operate "around" the kernel, which allocates the processor and memory resources the programs need to function, hence the name kernel. All Linux distributions come with a kernel. But, like the OpenSSL and OpenSSH distributions, the kernel on the Linux distribution is often behind the current build. Each new kernel build or sub-build adds new feature and driver support, along with correcting any bugs or security vulnerabilities. We are building a kernel to ensure that the networking support we need to support our proxy server is in place. For some, building a kernel is a somewhat daunting task, this was true with earlier versions of the Linux kernel. Since the release of the 2.4 kernel, which is now essentially "General Deployment," there are a number of resources on Web on how to build a Linux kernel. Our goal is cover all of the elements you need to include in the kernel build to support the proxy server environment.

There are three basic steps to building the kernel: Prep, compile and install.

Before starting the kernel build, you need to get some basic information on the server your building the kernel for. There are two resources you can use to gather this data. The first is the output /bin/dmesg that prints the output of the kernel load process, allowing you to see which drivers were loaded by the kernel that is currently running. The /bin/dmesg output is sent right to command shell; to save it to a text file, you can redirect the output. Here is the syntax to save the output to a file and then print the output to the shell:

Here are some other command output options you can use with /bin/dmesg to collect specfic information.

The other command is /sbin/lspci, which displays information about all of the PCI busses on the server and the cards connected to them. It operates the same way the /bin/dmesg does, here is command syntax that saves the output and prints it to the command shell:

Once you are in the top level of the kernel source tree, the first command you want to run is:

The make config option is the most tedious; it is a shell script that asks configuration questions sequentially. Simple to use, unless you make a mistake, then you need to start all over again. The make oldconfig option reads an existing .config file (located in the top of the kernel source tree) and uses that as a basis to build a new kernel config file. What is nice about this option is that if there are any inconsistencies between the old config and new kernel options you will be prompted to resolve them. This is a great way to start building a config file. Once the basics have been "filled" in you can use make menuconfig, an ncursus shell menu to tweak the config. Or, if you have XWindows (which you don't) installed you can use the make xconfig option to get a GUI menu interface. Since this a new kernel, use the make menuconfig option.

Selecting which options to build is largely dependent on the type of hardware your server is comprised of. Here is the Main Menu for the 2.4.31 kernel distribution: 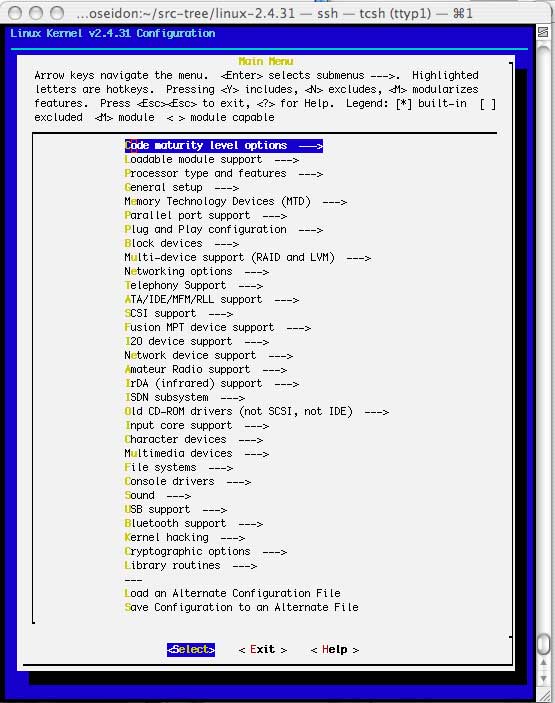 If you have a basic Pentium/AMD server with IDE and built-in graphics you can go with the default settings for the following:

Loadable Module Support: Enabled by default, provides the ability to load drivers and kernel level services. The /etc/modules.conf file defines which modules are loaded at boot. The modules themselves are located in /lib/modules/

Processor type and features: Specifies which processor the kernel is built for. Pentium-III/Celeron with Symmetric multi-processing support is defined by default. To verify which CPU processor your server is running. Check /proc/cpuinfo, using the command:

SCSI support: Defines options for SCSI support. If your hard disk, CD ROM, etc is SCSI you will need to build in support for these devices along with the SCSI controller into the kernel.

Networking Options: Defines kernel supported network options, such as IP firewalling, 802.1Q and 802.1d support. This option is the focal point for the type of server we are building. To ensure speed and performance the following options are built into the kernel:

Networking Device Support: Defines the kernel support for network device drivers. This option is particularly critical because without the proper driver support the kernel will not recognize the servers network interfaces. The output from the /bin/dmesg | more | grep eth command will provide you with information you need to select the correct drivers to build into the kernel.

Once the kernel build options have been defined. The last step before building is to assign a unique kernel name. This is done by setting the name in EXTRAVERSION field of the default Makefile located in the root of the kernel distribution tree.

There are two reasons for customizing the kernel name. First, it makes it easy identify the kernel. Second, the full kernel name is used to identify the kernel modules. Using custom names for each kernel version build from the same core kernel source makes it possible to have different module trees for each variation. Without the custom variable, each new install with overwrites the modules of the previous build.

With the kernel build customizations complete, the build process is a four-step process:

Installing the new kernel involves a few steps. First, the new compressed kernel image file, usr/src/linux/arch/i386/boot/bzImage needs to be installed in the /boot directory, renamed in the following format:
vmlinuz.version.patchlevel.sublevel.extravesrion.

Once the new kernel file is installed, the next step is to copy over the System.map file. Located in the root of the kernel source tree, into the /boot directory using the same naming format used for the kernel image.

Now we need install our kernel boot information above the default configuration so, the server will boot the new kernel by default when the system is rebooted. This is easy to do, by inserting our configuration information, bellow the splashimage= definition. We can use the current boot configuration as a template and just change the kernel definition and provide a new boot loader menu title:

The syntax of GRUB is a little confusing. For starters kernel definition assumes /boot as the root of the directory tree. So in the example above the kernel file location is an actually /boot/vlminuz-2.4.31. When defining drives and partitions, GRUB counts drive controllers and drive partitions starting with 0, not 1. So above the actual location of the root partition is on the first controller, first partition. And, were done! Our kernel is built and installed -- now all we need to do is reboot.

If all went as planned you should be running on a freshly minted kernel and are now ready to start the next phase of the server build, configuring networking and building and configuring ISC DHCP, BIND (DNS), SQUID (HTTP Proxy) and Web Proxy Automatic Discovery (WPAD) service. Stay tuned…