It might sound strange, but thinking about a controversy in the green movement can help explain the problem of increasing wireless network bandwidth demand.

Do you roll out services before your network can accommodate them?

Climate change advocates often trot out a graph that purports to show mean global temperatures over time. The graph shows a sharp inflection point during the 20th century at which temperatures began to grow exponentially. This is the dreaded hockey stick" graph, and although some of the science behind it is very much in doubt, it's a real attention-getter.

In the telecom industry, much attention is being paid to a developing hockey stick situation that has a much more immediate impact on most people and, in fact, has serious implications for most wireless users -- rising network bandwidth demand as more customers adopt smartphones.

As AT&T is learning with its iPhone, it isn't wise to build a limited network and then promote wireless devices that can consume unlimited network bandwidth. It is akin to using a 1200-baud modem with Internet Explorer 8 on a desktop computer -- while the technology probably works, it doesn't work very well.

The situation is likely to become acute not only for AT&T but for all carriers deploying advanced, data-capable networks. As Verizon contemplates its Long Term Evolution (LTE) rollout, slated to begin in 2010, it will probably face the same dynamic and the resulting question: Do you roll out services before your network can accommodate them? So far, that has been the approach of many carriers because, by and large, people have not expected high service quality for their wireless devices.

Now, people expect higher quality from their wireless networks. As a recent survey by Stratecast disclosed, consumers currently rate their cellular service very highly (see figure below). Yet, as noted in a previous column, they rate the overall value of their wireless telephone service lower than their landline phone service. The reasons are varied, but the differences are sufficient to place a floor on the number of subscribers willing to cut the cord on their landline phone service. Overwhelmed networks are likely to have an even greater impact on the consumer perception curve. 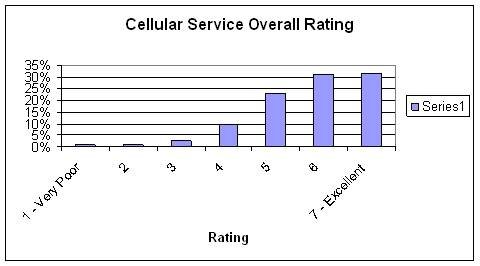 So, is there a solution? The simple answer is "yes," and the more complex answer is: "Yes, but carriers need to conduct business differently than they have been."

As noted in previous Stratecast reports, the consumer communication space is evolving quickly to a service-centric focus.

The implication is that services are what consumers value and the basis on which they rate carriers and make purchasing decisions.

Carriers must do a better job of planning service delivery, support and integration with other services. Failure to do so will lead to the problems AT&T is experiencing. One aspect of that planning must be to assume a demand curve that is realistic given the nature of the service being delivered.

Highly capable, Web-enabled devices will consume a lot of network bandwidth. If your wireless networks are incapable of handling such volume, it is best either to first build out the network to handle heavier network bandwidth demand or to release services with built-in use limitations. While you can always improve a service package by loosening use restrictions as the network catches up, it is dangerous to start with unlimited usage and add limitations after the fact. The former approach increases user satisfaction over time; the latter does exactly the opposite.

Failure to recognize the development of a real hockey stick curve for network bandwidth demand can be very troubling and painful. AT&T is finding that out right now.

About the author:
Mike Jude is a program manager at Stratecast/Frost & Sullivan in charge of the consumer communication services practice. He brings 30 years of experience in technology management in manufacturing, wide-area network design, intellectual property management and public policy. Jude holds degrees in electrical engineering and engineering management and a Ph.D. in decision analysis. He is co-author of The Case for Virtual Business Processes: Reduce Costs, Improve Efficiencies and Focus on Your Core Business, Cisco Press, 2003.