Networks and the systems that support them are slowly maturing -- they are still only at Step 2 (of 4) of the Gartner IT Process Maturity Model. This means that the heavy lifting and regular maintenance of networks must be attended by humans. The consequence is that networks are slow to adapt, difficult to manage, and do not scale easily. When will this situation change?

As a reliable source of market wisdom, one of Gartner's gifts has been the simple but reliable model of IT maturity (c. 1999). It demonstrates the stages of development that most IT processes evolve through. The four steps include (without the initial stage of chaos, and somewhat paraphrased from the original to emphasize the mechanical, rather than market, nature): 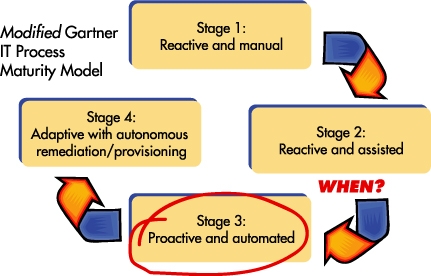 Here, the implicit essence of these steps roots in the role of the human -- either the end-user or the network manager or both. A brief review of the steps in this regard is revealing.

Step 1: Reactive/Manual
Deployed and engaged by human hand, typically in response to a perceived need, to achieve an objective specific to a human process;

Step 2: Reactive/Assisted
Deployed and engaged with the assistance of tools and adjunct technologies, mediated by human interaction, typically to achieve an objective specific to a human process;

Step 3: Proactive/Automated
Deployed and engaged by some automatic mechanism, typically in response to a signal generated by some other mechanism without direct human mediation, to achieve some limited objective originally determined by a human, requiring occasional review and modification;

Step 4: Adaptive/Autonomous
Deployed and engaged automatically, in response to a range of signals from other systems, with objectives variably defined by circumstances, as part of a larger process that forms a complete set of functionalities.

Clearly, the requisite level of involvement of humans defines each step -- much in a way that a growing child requires guidance and intervention in decreasing degrees from a parent or guardian. In that metaphor, the steps might be relabeled as newborn, child, youth and adult. As an "adult" at Step 4, the IT processes would simply take care of themselves, perform their function and be relatively robust to change (if not actually adaptive).

As the example under examination, IP networks and their related processes somehow have not yet passed out of childhood. Like children, they show considerable potential, need regular maintenance, and nearly constant supervision. Curiously, IP networks have been around a long time but show few signs of moving into adolescence. And it is also fair to note that the expectations of IP networks have been changing very rapidly too.

Considering the description of Step 3, there are a number of signs that might indicate some maturation. They could include:

Reviewing the IP network landscape, it is hard to find many instances of these signs. But they are beginning to appear.

Some early examples might include IP routing, ICMP-based feedback (e.g. path MTU discovery) and Ethernet interface auto-negotiation (an unfortunate mutation). However, these date back to the genesis of IP networks and might be considered innate features. Some more recent examples of maturation include:

Unfortunately, there is still a great deal of coping evident as well. Traffic shaping, extensive use of SNMP to deduce state and performance, managing problems instead of resolving them (See Not your father's NMS – PDF), the sorry state of SLAs (See The death of SLAs), inefficient use of resources (See Not your daddy's TCP), etc.

One of the clearest signs of stalled maturity is the lack of willingness evidenced by "guardians" to allow IP networks run themselves. Network engineers and managers are typically highly reluctant to engage automatic mechanisms that modify the behavior of networks. Lack of visibility to the consequences of change and relative fragility are most often cited as the reasons. Trust must be earned - especially given the weighty responsibilities networks have today.

So IP networks are not ready for Step 3. Yet. The convergence of fixed and mobile technologies, the fresh demands of VoIP and IPTV, and the ever-increasing dependency of all sorts of applications on networks will continue to retard the maturation toward an effective infrastructure that reliably supports pro-activity and automation.

Childhood just got harder. And longer.

And what of the far future of IP networks? To complete the picture, Step 4 might be characterized in the following fashion:

The end result is the ubiquity and transparency associated with any mature technology.

Oh when will they ever grow up?

Chief Scientist for Apparent Networks, Loki Jorgenson, PhD, has been active in computation, physics and mathematics, scientific visualization, and simulation for over 18 years. Trained in computational physics at Queen's and McGill universities, he has published in areas as diverse as philosophy, graphics, educational technologies, statistical mechanics, logic and number theory. Also, he acts as Adjunct Professor of Mathematics at Simon Fraser University where he co-founded the Center for Experimental and Constructive Mathematics (CECM). He has headed research in numerous academic projects from high-performance computing to digital publishing, working closely with private sector partners and government. At Apparent Networks Inc., Jorgenson leads network research in high performance, wireless, VoIP and other application performance, typically through practical collaboration with academic organizations and other thought leaders such as BCnet, Texas A&M, CANARIE, and Internet2. www.apparentnetworks.com