The last tip in this series introduced you to the forwarding mechanisms of multicast traffic and gave a basic overview...

of Reverse Path Forwarding (RPF). We've now finally made it to the brief discussion of multicast distribution trees (MDT), on our way to the in-depth look at multicast routing protocols and multicast configurations.

Trees?
Yes a tree. As unicast traffic is forwarded throughout a network, its path takes it from source (S) to destination only. If you plot the path the resulting picture looks more like a stick and not a tree. Multicast traffic, however, forwarded from source (S) to a group (G) of destinations creates a "tree-like" picture. There are two types of multicast distribution trees: Source Trees and Shared Trees.

Source Trees
A source tree is the most basic of multicast distribution trees. With this type of distribution the source (S) takes the most direct route to the receivers. Because the root, or hop point of this tree is based at the source, each source creates its own SPT. So what if you have 50 multicast sources within your network? Exactly. If this is the case, each source will create its own tree and subsequently its own (S,G) entry in the multicast routing table. S,G is pronounced "S comma G" for future reference. The diagram below illustrates the SPT. 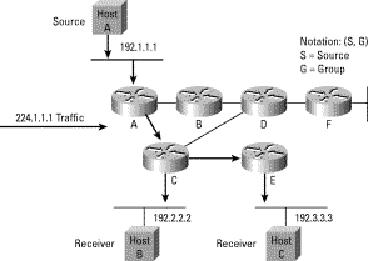 Shared Trees
The more common way to distribute multicast traffic is by setting up shared distribution trees, also known as core-based trees (CBT). Recall that with SPT the root of the tree is at the source each source creates its own S,G entry. With CBT there is a shared (configured) root for multicast distribution. Often times this shared root is called the Rendezvous Point (RP) and is essential for the proper configuration of various multicast routing protocols. Each source must send their traffic to the RP for correct distribution to all receivers. Instead of a S,G entry, this creates a *,G or "star comma G" entry within the multicast routing table. The asterisk represents "all sources." The diagram below illustrates a shared tree. 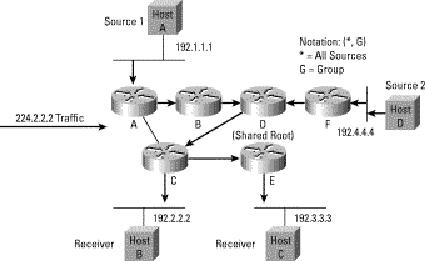 The diagram shows Router D as the RP for the network. Keep in mind that specifying an RP is a global parameter and will be used for all sources. Also notice that the multicast traffic in this case does not necessarily take the shortest path. This is an important point when designing multicast networks. Generally you want the RP as close to the source as possible, which sometimes can be difficult if the sources are spread far apart on your network. There are ways to make that simple too, but well beyond the scope of this article. CBT can also be described further: bidirectional and unidirectional. Think of this as sending multicast traffic both upstream and downstream within a CBT. I can save that one for later. There are also cases where traffic will use both an SPT and CBT for distribution. This is common when describing some multicast routing protocols such as PIM. Next week I'll start the discussion on PIM and begin to put a configuration twist on all of this talk!

Doug Downer (CCIE #9848) is a Sr. Consultant with Callisma, INC, a wholly owned subsidiary of SBC Communications. Doug has over 7 years in the industry and currently provides high level business and technology consulting for various federal clients in the Washington D.C. area. He can be reached at ddowner@callisma.com.