When it comes to wide area networks (WANs), MPLS clearly rules the roost. Seventy-four percent of the organizations...

that participated in Nemertes' 2011-2012 Computing and Communications benchmark have successfully deployed MPLS/IP-VPN services. I'm referring, of course, to Layer-3 IP VPNs, in which carrier routers peer with customer edge (CE) routers, and communications between the carrier and the enterprise happen at the IP layer.

Why are companies using MPLS? Here are some MPLS advantages:

Where in the WAN is MPLS used?

How are companies using MPLS? Unsurprisingly, given these MPLS advantages, the most common use for MPLS is to connect branch offices to data centers and interconnect branch offices to each other. Sixty-seven percent of benchmark participants use MPLS for this purpose. Just over half -- 52% -- are using it to interconnect data centers, and 20% say they're using it to connect remote sites. 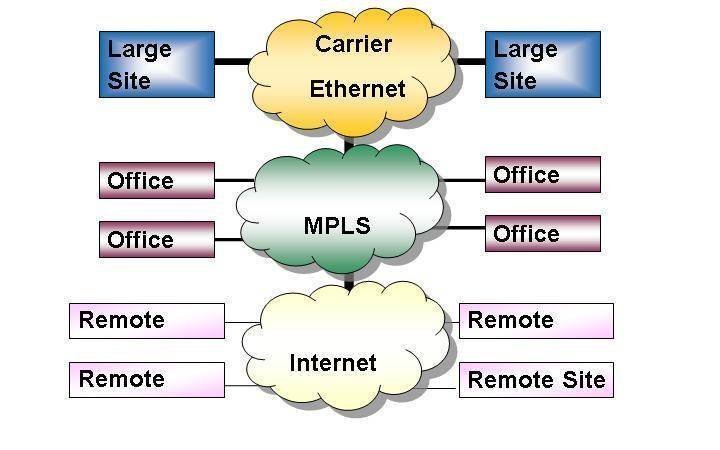 As noted, MPLS is great at -- and widely used for -- interconnecting data centers and branches, and branches to each other. That level of connectivity comprises Tier 2 in the WAN architecture. What about the other two tiers?

For Tier 1 -- interconnnecting data centers -- the most common alternative to MPLS is carrier Ethernet. Carrier Ethernet is an umbrella term that covers point-to-point Ethernet, metro Ethernet, and any-to-any topologies like virtual private LAN service (VPLS). The common denominator to all these services is that they operate at Layer 2 -- where the enterprise handles all routing.

At the opposite end of the WAN there's Tier 3: connecting to remote and small offices. Most companies already use Internet services to connect at least some of their remote and small offices to the WAN. Sometimes these are business-caliber Internet services (with SLAs); other times they're consumer-grade "best effort" offerings. To ensure privacy, companies may deploy encryption, including secure socket layer (SSL), IPsec, or proprietary application-layer security.

The big benefits the Internet confers over MPLS in this Tier-3 scenario are cost and ubiquity. Internet services are typically considerably cheaper than MPLS (though commercial-grade services, with SLAs, can approach MPLS in cost). And it's rare to find a location that doesn't feature at least some flavor of Internet access.

The downside? Unreliability. Consumer-grade Internet services, in particular, can be spotty, both in service quality (where the service is working, but poorly) or outright availability (where there's an outage).

The bottom line? MPLS advantages include the connectivity of data centers to branch offices, or branches to each other. For point-to-point links requiring a lot of bandwidth, or remote offices where cheap connectivity is the most important factor, Carrier Ethernet and Internet services, respectively, are solid alternatives.