Find out the new features of the Windows Server 2008 Advanced Firewall -- and how to configure this powerful host-based firewall using the new MMC snap-in -- in this tip, originally published on WindowsNetworking.com.

Why use the Windows host-based firewall?

Many companies today secure their network using the "hard outer shell / gooey center" approach. What this means is that they create a strong perimeter around their network with firewalls and IPS systems, protecting themselves from malicious attackers on the Internet. However, if an attacker could penetrate the outer perimeter and gain access to the internal network, there would only be Windows authentication security to stop them from gaining access to the company's most valuable assets -- their data.

After reading this article, I hope that many of you will take a second look at the Windows host-based firewall. With Windows Server 2008, the host-based firewall is built in to Windows. It is already installed, now has more features, and is now easier to configure. Plus, it is really one of the best ways to secure a crucial infrastructure server. So, what can the Windows Server Advanced firewall do for you, and how do you configure it? Let's find out.

What does the new advanced firewall offer, and how can it help you?

New with Windows Server 2008, the built-in firewall is now "advanced." And it isn't just me saying that: Microsoft now calls it the "Windows Firewall with Advanced Security" (let's abbreviate that as WFAS).

Here are the new features that help justify that new name:

With the addition of being a bi-directional firewall, a better GUI and advanced rules configuration, the Windows Advanced firewall is bordering on being as good as traditional host-based firewalls (like ZoneAlarm Pro, for example).

I know that the first concern of any server admin in using a host-based firewall is: what if it prevents critical server infrastructure apps from functioning? While that is always a possibility with any security measure, WFAS will automatically configure new rules for any new server roles that are added to the server. However, if you run any non-Microsoft applications on your server that need inbound network connectivity, you will have to create a new rule for that type of traffic.

What are the options for configuring Windows Firewall with Advanced Security?

With Windows Firewall with Advanced Security (WFAS), most admins will configure the firewall either from Windows Server Manager or the MMC with only the WFAS snap-in. Here is what they both look like: 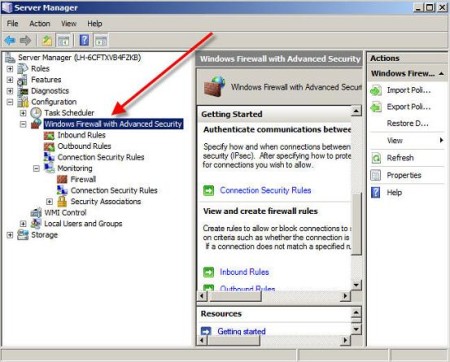 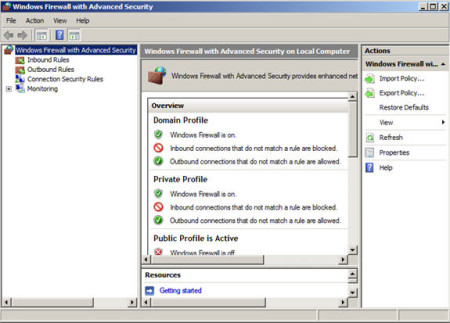 What I have found is that the quickest and easiest way to start the WFAS MMC is to just type firewall in the Start menu search box, like this: 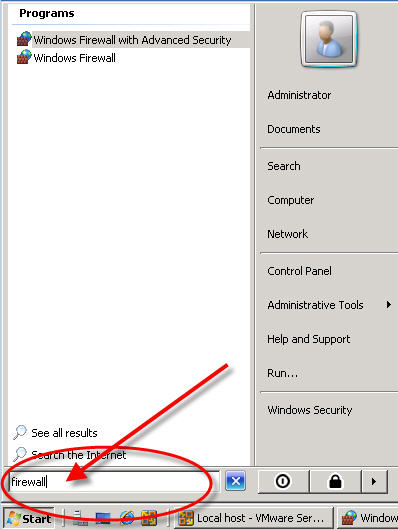 There is also a new netsh advfirewall CLI option for configuring WFAS.

What can I configure using the new WFAS MMC snap-in?

Because there are so many possible features you can configure with the new WFAS MMC snap-in, I can't possibly cover them all. If you have ever seen the configuration GUI for Windows 2003 built-in firewall, you will quickly notice how many more options there appear to be with WFAS. However, let me hit on a few of the most frequently used.

When you first go into the WFAS MMC snap-in, by default, you will see that WFAS is ON and blocking inbound connections that don't have a matching outbound rule. In addition, the new outbound firewall is turned off.

Something else you will notice is that there are also different profiles for WFAS (see Figure 4 below). 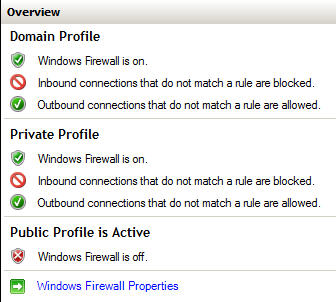 There are a domain profile, private profile and public profile for WFAS. What these different profiles allow you to do is take the many inbound and outbound rules you may have and apply that group of firewall rules to your computer based on where your computer is connected to the network (say the corporate LAN vs. the local coffee shop).

Out of all the improvements we have talked about with WFAS, in my opinion, the most significant improvement is the addition of more sophisticated firewall rules. Take a look at the Windows 2003 Server Firewall option to add an exception (a rule), in Figure 5. 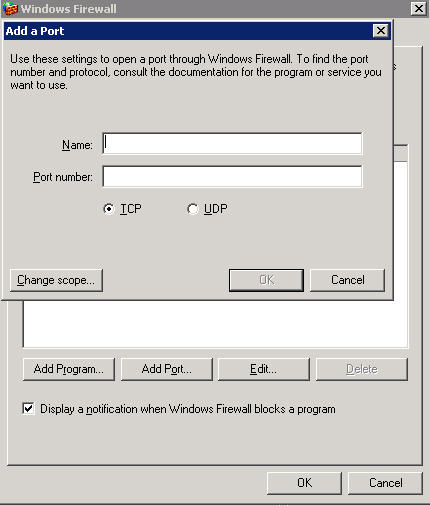 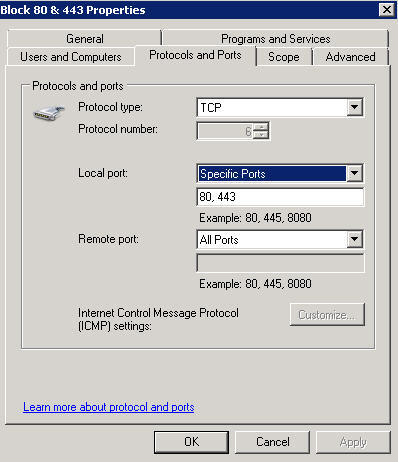 Notice how the Protocols and Ports tab is just a small part of the multi-tabbed window. You can also configure rules to apply to Users and Computers, Programs and Services, and IP address scopes. With this type of sophisticated firewall rules configuration, Microsoft has pushed WFAS more toward Microsoft's IAS server.

The number of default rules offered by WFAS is truly amazing. In Windows 2003 Server, there were the three default exceptions (rules). Not so in Windows Server. WFAS offers about 90 default inbound firewall rules and at least 40 default outbound rules -- Wow! 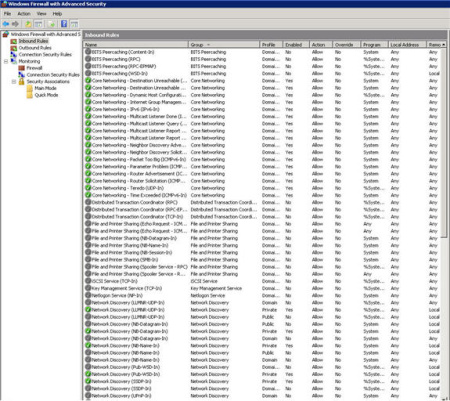 How to create an inbound custom firewall rule

So, how do you create a rule using the new Windows Advanced Firewall? Let's step through it.

Say that you have installed Apache Web server for Windows on your Windows 2008 Server. If you had used IIS, built-in with Windows, the port would have been automatically opened for you. However, as you are using a third-party Web server and you have the inbound firewall enabled, you must manually open the port.

At this point, you should have a rule that looks like this:

I tested that my newly installed Apache Web server would not work when just installed with the firewall enabled. However, after the rule, it works great!

With firewall profiles, sophisticated rule configuration, and 30 times more default rules than it predecessor, the Windows 2008 Server firewall truly lives up to its name, showing that it really is the "advanced" firewall that Microsoft claims it to be. I believe that this built-in, free, advanced host-based firewall will make sure that the Windows servers of tomorrow are much more secure. However, it cannot help to secure your server unless it is used. So, I hope you will try out the new Windows Advanced Firewall today!

About the author:
David Davis (CCIE #9369, CWNA, MCSE, CISSP, Linux+, CEH) has served as an IT Manager for more than 15 years. He has a number of certifications including CCIE #9369, MCSE & VCP. Additionally, David has authored more than one hundred articles, a number of video training courses including Windows XP, Wireless Networking, Linux Administration, Microsoft Virtual Server, VMware Server & Workstation, and VMware ESX Server. David writes a blog, David's Cisco Networking Blog, on the IT Knowledge Exchange and publishes Cisco networking how-to articles and videos at his website, HappyRouter.com.

Dig Deeper on Working With Servers and Desktops