Unfortunately, there is no way I can possibly tell you everything you need to know about preparing your network for the implementation of UC within the context of a single article. There are simply too many UC products on the market, and all of them work differently. Even if I were to limit my discussion to a single product, entire books could be written on the subject.

With that in mind, I want to focus my discussion on how deploying Microsoft Live Communications Server in a production environment might differ from a lab deployment in regard to the impact on your network.

Extending the Active Directory schema isn't really that big a deal, but you will want to back up your domain controllers beforehand, just in case something goes wrong. You will also want to keep in mind that the schema extension process may temporarily affect the Active Directory's performance. Schema extensions consume disk and CPU resources on the domain controllers; they also generate replication traffic.

Larger organizations should pay particular attention to the replication traffic that will be flowing between Active Directory sites, because sites are often connected by relatively slow links. When you install Live Communications Server, its setup program creates a number of new security groups. This means that updates must be made to the Global Catalog. Typically, each Active Directory site contains at least one global catalog server, so you must take global catalog-related replication traffic into consideration when planning for the initial deployment.

Another area in which a lab deployment may differ from a real-life deployment is in the DNS requirements. In a lab environment, you can get away with deploying Live Communications Server without having to perform any additional DNS-related tasks beyond those required by any other Active Directory environment. If you don't prepare the DNS Server ahead of time in a lab environment, you will receive a warning message in the installation log, but the installation will complete successfully.

The reason you should take the time to create some records on your DNS Server is that without certain records being present, client auto configuration will not work. This isn't a big problem in a lab environment, but automatic configuration is essential in a production environment because few administrators have the time to manually configure each client.

In addition to the host record, you will also need to create a service record (an SRV record). In case you aren't familiar with service records, their job is to tell clients which protocol they should be using to communicate with a particular application. In the case of Live Communications Server, the SRV record is what actually facilitates automatic client configuration.

Even if you have created the various DNS records in your lab environment, you may find that you need to create a slightly different type of SRV record in a production environment. The actual contents of the SRV record will vary depending on whether or not TLS is encrypted, whether Live Communications Server is being accessed internally or externally, and the type of client application that is being used. The table below lists the information that you need in order to create the necessary SRV record: 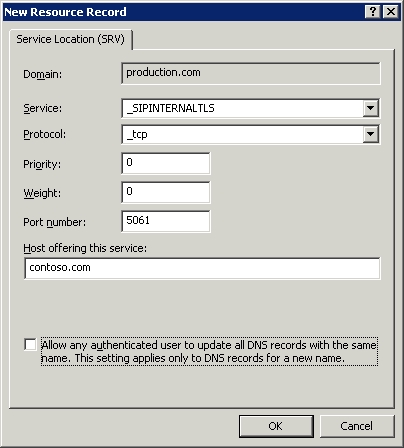 This is what the dialog box used for creating an SRV record looks like.

You can get around this problem by taking advantage of the certificate's "Subject Alternative Name" field. This field allows you to specify all of the domains for which the certificate should be used.

Unfortunately, I've only been able to scratch the surface in talking about the things that you will need to consider when preparing your network for a Live Communications Server deployment. Hopefully, though, I have given you enough information to get you past some of the biggest deployment hurdles.