Most end users would bypass IT security policies they dislike 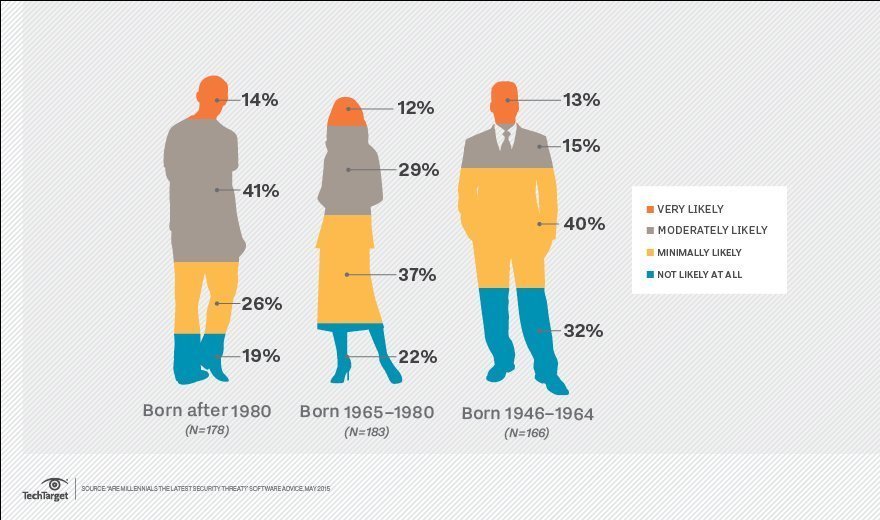 It's hard enough to prevent a data breach when cybercriminals are changing their attack patterns faster than the software designed to stop them is updated. But on top of that, users are often trying to circumvent IT security policies they consider too restrictive.

In fact, most employees say they are at least somewhat likely to look for security workarounds if they can't access their favorite applications or websites at work, according to a survey by Software Advice of 529 employees of U.S. businesses. The study examined how an employee's age correlates to his or her compliance with IT security policies, divvying up the respondent pool into three groups: Millennials (born after 1980), Gen X (born 1965-1980) and Baby Boomers (born 1946-1964).

Age appears to have no bearing on the most serious security scofflaws, with roughly the same proportion of respondents -- 13% to 15% -- in each generation admitting they would be "very likely" to subvert IT security policies. After that, however, the demographics split. Younger employees are the most prone -- 41% -- to being "moderately likely" to look for workarounds. Boomers, on the other hand, were the most conservative, with 32% saying they were "not at all likely" to sidestep security policies.

Additionally, the survey found at least three out of four employees across all age groups say they have reused a password in the past 12 months; 85% of Millennials fessed up to the practice. Meanwhile, older employees were more likely to access work documents on personal devices, with 47% and 48% of Gen X-ers and Baby Boomers, respectively, saying they do so "very often," compared to 40% of Millennials.