Average cost of a data breach hits $154 per stolen record 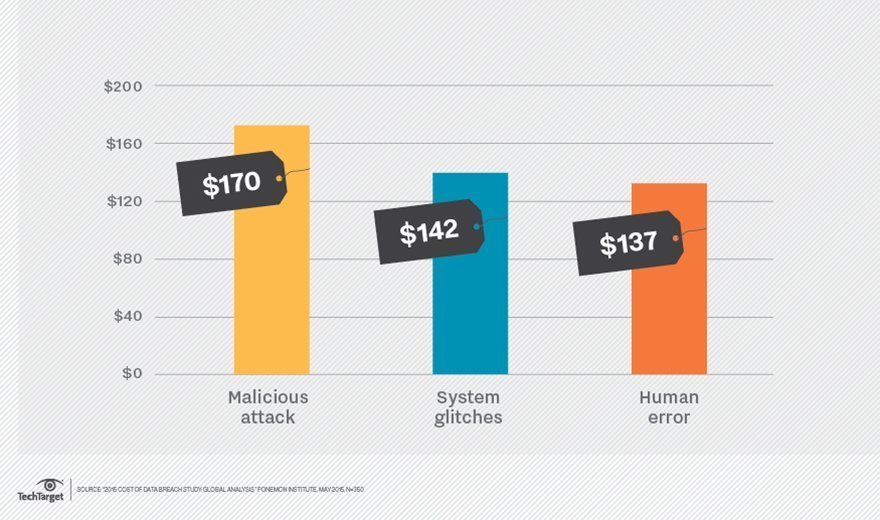 Ignoring the risk of a data breach can be costly -- literally. Each lost or stolen record with sensitive or confidential data costs an enterprise $154 on average, according to a May 2015 report by the Ponemon Institute, which surveyed 350 companies worldwide that experienced a data breach in 2014. That's up from $145 -- or 6.2% -- from the previous year.

The ultimate cost of a data breach is significantly influenced by what caused it and where it happened. Each record that was compromised due to a malicious or criminal attack cost an average of $170, up from $159 the previous year, according to Ponemon. Such attacks hit U.S. companies the hardest, costing an average $230 per stolen record. At the other end of the spectrum, the average cost of a data breach caused by cybercriminals was only $71 per record in India, according to the report.

If you don't think it can happen to you, think again. Malicious or criminal attacks were the most common cause of data breaches in the past year, making up 47% of all breaches globally. They were most prevalent among companies in the Persian Gulf, Germany and Canada, accounting for more than half of all data breaches in those regions.

It's worth noting, however, that Verizon estimates a far lower cost per compromised record -- 58 cents -- in its 2015 Data Breach Investigations Report (DBIR). Verizon chalks up the dramatic difference to the fact that Ponemon excluded breaches with more than 100,000 records, with the DBIR arguing that a more accurate way to calculate the overall cost of a data breach is by the number of records affected.