The IPv6 protocol has been in the works for more than 15 years, since it was first realized that the pool of IPv4 addresses -- more than 25 years old -- couldn't keep up with the anticipated demand for Internet addressing. Interest in IPv6 has picked up considerably in the last few years, especially once the Internet Assigned Numbers Authority (IANA) depleted its IPv4 address pool. The following is an IPv6 timeline of major milestones in the history of the Internet Protocol version 6. 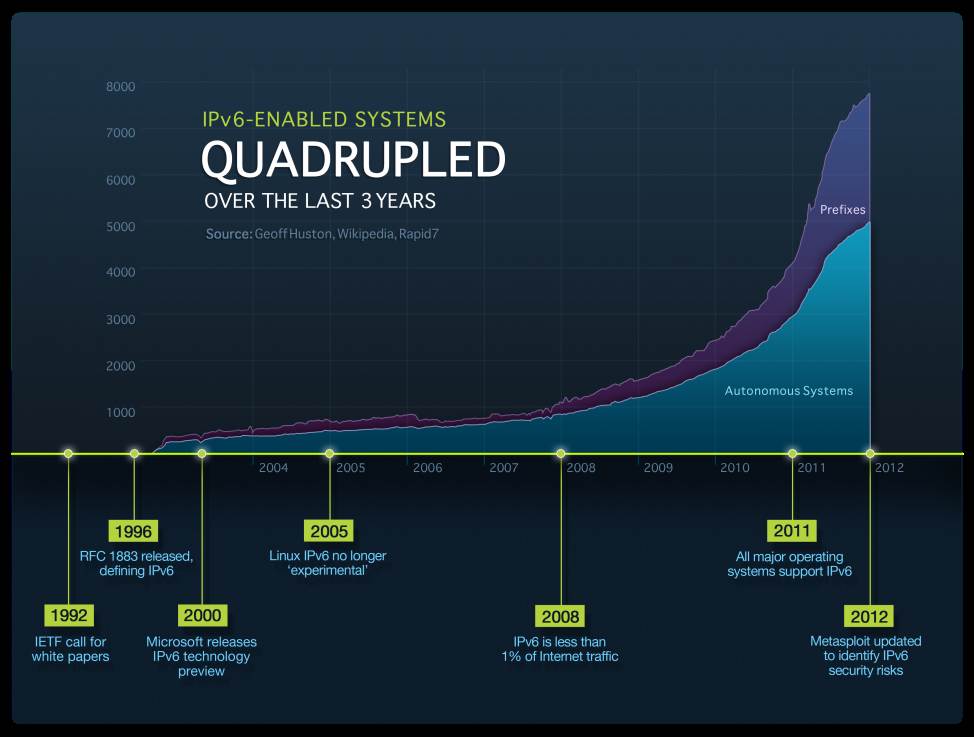 IPv6 timeline: A history of the Internet Protocol

1981 Internet Protocol version 4 (IPv4) is first published as a system of addresses used to identify devices on a network, although work on the protocol began in the 1970s. It is the most widely used Internet-layer protocol today and a key element in connecting devices to the Internet.

1990 Approximately one-eighth of total IPv4 address spaces are utilized as Internet use increases and more companies rely on it for information transport.

1992 Reacting to the rapidly dwindling number of IPv4 address spaces, the Internet Engineering Task Force (IETF) calls for proposals on the development of a next-generation IP addressing protocol.

1995 Approximately one-third of total IPv4 address space is utilized; IPv6 is born, presented by the IETF as IPv6 RFC 1883 (note that RFC 1883 was not approved as a proposed standard until 1996).

1997 IBM reacts to the growing need for IPv6 support and adds it to its AIX 4.3 Unix operating environment, the first commercial platform to support IPv6. This is followed by IPv6 early adopter kits for Tru64 and OpenVMS Digital Equipment Corp.'s operating systems.

1998 Microsoft Research prepares for the impending increased demand for IPv6 by releasing its first experimental IPv6 stack. Seeking further comment on the development of the basic IPv6 protocol, RFC 2460 is published. Production-quality Berkeley Software Distribution (BSD) support for IPv6 is made available over the KAME project via FreeBSD, OpenBSD and NetBSD. (The KAME project was a joint effort of six companies in Japan to provide a free stack of IPv6, IPsec and Mobile IPv6 for BSD variations.)

1999 The IPv6 Forum is created, chartered to function as a worldwide consortium dedicated to creating a quality and secure next-generation Internet. It initially attracts 45 members. The Regional Internet Registries (RIRs) determine and allocate IPv6 ranges.

2000 Approximately half of total IPv4 address space has been utilized. Microsoft continues to show support for IPv6 and releases a technology preview of IPv6 for Windows 2000.

2002 Approximately two-thirds of total IPv4 address space has been utilized. IBM gets behind IPv6 adoption and adds support to its z/OS, starting with version 1.4.

2008 The U.S. achieves IPv6 capability on all government systems, as required by the U.S. Office of Management and Budget (OMB) Mandate, and the European Commission announces an initiative for 25% of users to adopt IPv6 by 2010. Google gets into the game and offers an IPv6 Web interface for its search engine, and the Olympic and Paralympic Games in Beijing are the first major world events to be broadcast with IPv6.

2009 Google builds an extension of its IPv6 initiative, offering IPv6 support for Google services to compatible networks. As 85% of IPv4 address space is exhausted and IPv6 summits are held in Ireland, China and Korea, 2009 is unofficially called "The Year of IPv6."

February 3, 2011 The last block of IPv4 addresses is distributed to the RIRs by the IANA.

June 8, 2011 The Internet Society (ISOC) organizes World IPv6 Day 2011 for organizations to simultaneously test their IPv6 deployments and turn it on for the day. Many organizations that experience no problems leave their IPv6 turned on.

More resources on the IPv6 timeline and migration: