WAN data communications encompass broad geographically dispersed areas facilitated by transmission services of common carriers, as depicted in Figure 3.5. WAN technologies generally function at layers 1 through 3 of the OSI TCP/IP reference model, which is why most network engineers also function at this level. However, WAN appliances can also be "application aware" in that they are capable of analyzing application protocol streams and manipulating their behavior according to policy. 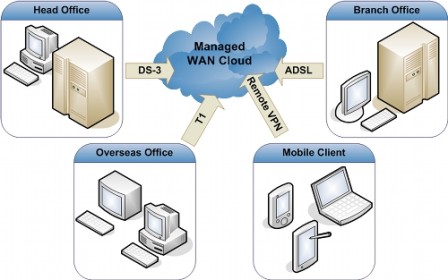 Figure 3.5: A key benefit of the "Managed WAN Cloud" is its ability to accommodate different kinds of WAN links for ingress and egress.

An established, individual communications path from subscriber to provider is referred to as a point-to-point link. In this arrangement, a carrier network (such as a local telephone company) provides a direct connection via leased lines (that may include copper wiring and other necessary hardware such as CSU/DSU units) to the customer's premises. Accordingly, both sets of links will generally use the same service provider network arrangements.

Circuits are normally priced according to bandwidth requirements and the distance between the two connection points. Point-to-point links are typically priced higher than Frame Relay links but also provide permanently established, exclusive connectivity between provider and subscriber regardless of the extent to which allocated bandwidth may be utilized. Another common term for such a link is leased line (which refers to the ongoing reservation of the connection between the two endpoints).

Using circuit-switching communications, data paths are formed as needed and terminated when such use ceases. This setup operates much like a typical telephone network in that "conversations" are arbitrarily created and terminated, existing only for the duration of the "call" (which is actually an active data connection between at least two parties).

ISDN is a primary example of this kind of technology: a switched circuit is initiated whenever a router possesses data for a remote site, which essentially places a direct-dial call into the remote site's circuit. Once the two parties are authenticated and connected, they begin the transfer of data from source to destination. Upon completion, the call terminates.

WAN packet-switching technology uses a shared carrier infrastructure unlike the private, one-on-one pairings used in a circuit-switched network arrangement. This scenario enables the carrier to make more efficient use of its infrastructure, often resulting in better subscriber costs for similar levels of service. In a packet-switched environment, a shared WAN medium is distributed and utilized among a broad subscriber base that creates virtual connections between sites for packet delivery.

Such a topology is called a cloud and includes protocols such as Asynchronous Transfer Mode (ATM), Frame Relay, Switched Multimegabit Data Services (SMDS), and -- less commonly in the US -- X.25. Packet-switched connectivity is ideal for organizations whose WAN traffic is "bursty" or variable in nature and does not require strictly dedicated bandwidth or always-on WAN links.

So-called virtual circuits may be defined as any logical circuit created between two network devices across a shared network medium. There are two types: switched and permanent virtual circuits.

Once initially established, permanent virtual circuits (PVCs) remain locked into data transfer mode thereafter for an indefinite period of time. (Though such circuits can and do go down occasionally for various reasons, they are considered "always up" by virtue of their operation.) PVCs are utilized in situations in which data exchanges are constant and ongoing between two points. These circuits involve increased costs for usable bandwidth owing to their constant availability, but that bandwidth also comes with availability and reliability guarantees.

Dial-on-demand routing and dial backup are two popular and cost-effective dial-up services for WAN connectivity. Dial-on-demand dynamically initiates calls when data is ready to be sent and specifies an idle timer that disconnects after a specified period of inactivity.

Dial backup uses switched circuits to provide backup services for a primary circuit such as point-to-point or packet switching. Routers are configured for failure detection and automatic failover until a disrupted primary connection is restored.

A typical WAN comprises numerous networking devices, most of which are not unique to the WAN environment itself. Modems, switches, and servers are non-specific, general-purpose elements in every business computing landscape. These devices bridge network connectivity among LAN and WAN segments, where each type provides different advantages and benefits, along with individually applicable disadvantages and drawbacks. Let's examine each representative category in turn.

Central dial-in/dial-out gateways for dial-up connections are called access servers. These devices provide LAN and WAN networking equipment access to asynchronous devices. Network access servers function as control points for roaming and remote users so that they may access internal resources (or to an ISP) from external locations.

An analog modem translates between analog and digital signaling. This enables data-bearing communications to transmit via voice-based telephony. Digital signals are converted into an analog format suitable for transmission through analog carriers and then restored to digital format on the receiving end.

The device that connects CSU to data terminal equipment (DTE) is called the data service unit (DSU). It adapts the physical interface on the DTE to the provider transmission facility (for example, E1, T1, DS-3) that converts between subscriber and provider protocol formats.

An ISDN terminal adapter is like a modem in that it joins Basic Rate Interface (BRI) connections to different physical interfaces on a router. Unlike a modem, it does not convert between analog and digital signaling.

Because of the many types of WAN links in use, there are likewise many challenges to and best practices for making the most of WAN optimization, where no two vendor solutions and strategies are exactly alike (though most share numerous elements in common). Some optimization techniques are incremental and provide only marginal performance improvements for application-specific traffic flows. Other optimization solutions are instrumental to sustaining long-term performance-enhancing goals and can fundamentally change the way certain network protocols operate -- most of which occurs transparently between the application and its end user. In addition, some vendors provide different classes of accelerated performance in their optimization products, including such major enterprise applications as Microsoft Office SharePoint, SAP, and Oracle Financials.

Actual data reduction implementations and methods vary widely among vendors and product platforms. For the purposes of this chapter, it suffices simply to distinguish among distinctive differences between data caching and data reduction approaches (data compression is completely different and mutually independent).

Data reduction has the following advantages over data caching:

Both data caching and data reduction employ a common data management strategy: that is, both depend upon a central point of access that also acts as the controlling authority for endpoint-to-endpoint transactions. Despite vast differences among vendor platforms and products, there are several noteworthy aspects common to all such implementations:

In each of these strategies, a centralized analysis and control point is required to monitor and modify entire network transactions through individual conversations. The proxy appliance or proxy server dutifully services this role and proves itself a greatly effective tool in enhancing performance and security capabilities for given client-server needs.

Through a consistent notion of where and how data travels, what is repeated (and thus, may be copied), and which applications (and identities, services, and so forth) are utilizing WAN links, WAN optimization devices create a model for networked communications that lets them maximize the traffic that WAN links can handle, and make the most of the WAN resources and bandwidth at their disposal. Enterprises and organizations also quickly realize that these devices provide a "golden opportunity" to impose and enforce policy and police network usage at the very chokepoints unwanted traffic might otherwise overwhelm. It's rare that technology solutions pay off more handsomely than they're expected to do so, but WAN optimization enable savvy buyers to put their money right where the pain and pressure usually reside, and realize a veritable bonanza as a result.

In the fourth and final chapter of this e-book, we will dig into the challenges most likely to be encountered when implementing WAN optimization, and the best practices that organization and enterprises should heed when deploying WAN optimization solutions. By the time you finish that material, you should have some good ideas about how to respond to those challenges, and what best practices you'll want to implement as well.

About the author:
Ed Tittel is a 24-year computing industry veteran who has worked as a software developer, systems engineer, trainer, and manager. He has also contributed to more than 100 computer trade books, including several college textbooks, and writes regularly for TechTarget, Tom's Hardware, and TechBuilder.org. Perhaps best known for creating the Exam Cram series of IT certification prep books in 1997, Ed also received the Best Networking Professional Career Achievement Award from the NPA in 2004, and has been a finalist in the "Favorite Study Guide Author" category in the CertCities.com Annual Reader's Choice Awards every year since those awards were launched in 2002.