The IEEE's 802.11ac ratification drives the final nail into Ethernet's coffin. According to Cisco's Visual Networking Index, Wi-Fi originated 49% of global Internet traffic in 2012 and will clearly dominate by 2017. Given 11ac's gigabit speeds and extended range, there are few reasons left to prefer Ethernet, at least for network access. However, the shift to 11ac isn't going to happen overnight; migration will take time and planning. When should your organization take the 11ac plunge?

How we got here

Today's Wi-Fi population is still largely composed of older products that support a mix of speeds and capabilities. As shown in the first chart, 802.11 products have come a long way over the past decade, with maximum data rates and the total capacity afforded by each wireless access point (AP) steadily increasing. 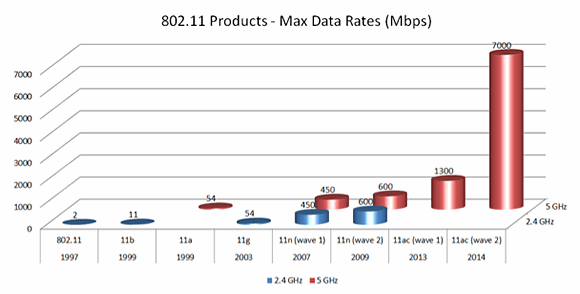 But if we look more closely at the chart, two additional trends can be seen.

For many businesses, 11n APs are still sufficient to meet today's bandwidth demands. So long as wireless LAN traffic continues to be dominated by email and Web and file sharing, 3x3 11n APs that reach 450 Mbps -- or even the rare 4x4 11n AP that reaches 600 Mbps -- are good enough.

That said, the number of devices and demand per device are growing at a rapid pace. In a recent Q412 Forrester Research survey from the fourth quarter of fiscal year 2012, 51% of workers say they already use a PC, smartphone and tablet for work; that number is expected to grow to 80% in the future. This suggests that the three-device-per-employee adoption level is becoming pervasive. Furthermore, many consumer electronic devices, smart appliances and industrial machines are becoming Wi-Fi enabled. These trends mean that today's WLANs are being pushed to higher densities than ever before, driving the need for gigabit AP capacity.

Additionally, the applications running on each device are gobbling bandwidth at faster rates. Forrester's research indicates that enterprise Wi-Fi devices are moving from kilobits per second of email and Web traffic in 2013 to megabits per second of streaming video, mobile VoIP and high-definition television traffic in 2015. At the same time, business use of desktop virtualization, thin client applications and cloud services continues to grow, driven by the bring your own device (BYOD) movement and a desire for business tools that don't require trusted or managed devices.

Combine a hundredfold growth in devices with an order-of-magnitude greater bandwidth per device, and you'll quickly outstrip the capacity afforded by 11n APs. This is where 802.11ac ratification can really help.

At the low end, 11ac allows battery-powered 1x1 clients like smartphones to max out at 433 Mbps. In the first wave, tablets and laptops can double or triple that max rate. 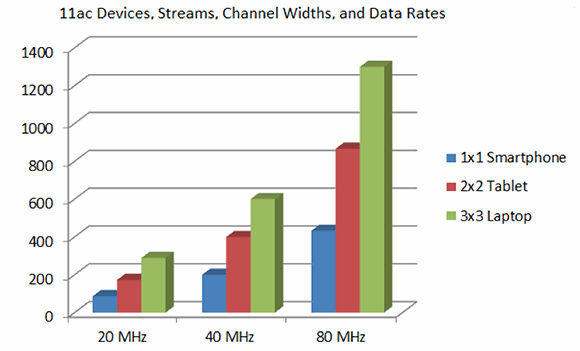 Yet 11ac also supports multi-gigabit rates for devices supporting new 11ac features, including 80 MHz and 160 MHz wide channels, 245-quadrature amplitude (QAM) modulation, and (in theory) 4x4 clients and 8x8 APs. In the second wave, APs supporting multiuser (MU) multiple input, multiple output (MIMO) may even converse with four clients simultaneously, further increasing WLAN density. It is those second-wave 8x8 APs with MU-MIMO that may someday reach nearly 7 Gbps. Few clients, however, will move beyond 1 Gbps or 2 Gbps. Those that do will be short-range, single-room devices -- for example, HDTVs and devices that stream video to them.

When to take the plunge

Many Wi-Fi clients will migrate naturally to 11ac (first wave) in the next 12 to24 months -- for example, smartphones that get replaced when two-year contracts expire, tablets with a two-year lifespan and laptops that get refreshed every three years. New personal devices that workers purchase and carry into the office will increasingly use 11ac. Together these trends will push enterprises to offer more WLAN capacity at 5 GHz, and to gradually diminish the resources dedicated to serving 2.4 GHz clients.

On the WLAN infrastructure side, there are few reasons to purchase 11n APs when 11ac APs are available at roughly the same cost. While organizations may be reluctant to initiate companywide AP upgrades until the second wave of 11ac matures, any 11n APs that get updated through a normal equipment refresh should probably be replaced with 11ac APs. Furthermore, because 11ac can support higher user densities, any area where demand is outstripping capacity should be considered a candidate for spot deployment of 11ac APs.

Eventually, there will be enough clients that support MU-MIMO to justify proactive investment in second-wave 11ac APs, particularly in high-density service areas. For the immediate future, however, most businesses should look at first-wave 11ac as the obvious first choice when Wi-Fi devices are being purchased for any reason, gradually weaving 11ac into their WLAN and moving along with the client population to 5 GHz operation.