Handling network change: Is IPv4-to-IPv6 the least of your problems? 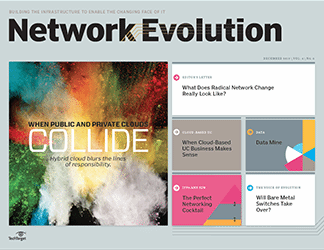 This article is part of the Network Evolution issue of December 2013 Vol. 4 / No.6

Technology transitions are not black-or-white, all-or-nothing. Never has that been clearer than in networking, where a number of complicated radical shifts are occurring simultaneously. Rivka Gewirtz Little Network change is imminent. All at once we are moving from IPv4 to IPv6, building private and hybrid cloud networks and evaluating software-defined networking (SDN) or network virtualization. Journalists and analysts tend to refer to technology transitions as one-time events, or changeovers that can be measured in short periods of time. Frankly, IT users would like nothing more than for these changes to be that clear cut. Unfortunately that's not the case. What we are learning is that making radical network changes takes long periods of time, and often these changes demand engineers to run both old and new technology together. In this issue of Network Evolution, we see multiple examples of what it looks like to make technology transitions by adopting new strategies while making the best of old. For example, very few IT shops ...