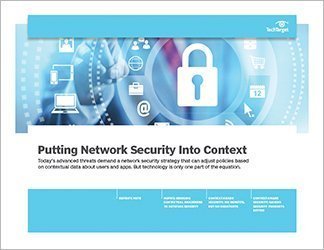 Increasingly, network admins are seeking tools to assess end-user patterns and then notify them in the event anomalies occur that suggest a network attack: for example, logins attempted from a different location or by attempts to access different apps. The goal is contextual security that allows systems to sense when something’s not right and take proactive steps to protect enterprise assets.

There’s a tendency among some IT professionals to believe that any technical problem can be solved with the right commercial product. Vendors call them solutions, after all. And at a time when some of the biggest members of the Fortune 500 are getting whacked with massive data breaches, there’s a similar tendency to allow panic to override reason. That is why it’s important to approach network security as not only a technology strategy -- because technology definitely plays a critical role—but also as an operational one.

As you’ll learn in this handbook, today’s advanced threats require an equally advanced approach to security. That approach should be based on context by crafting dynamic network security policies according to the identity and behavior of end users, applications and data. The technology is there to achieve this, from next-generation firewalls to sophisticated identity management systems, but does your team have the skills and resources necessary to configure and maintain it? Find out in this handbook.