Day two of setting up the network for the World Cyber Games has seen the network take shape.

After a quick trip to Sears to grab some extra tools — a wrench and a screwdriver set — the 25 switches have been configured and assigned names and IP addresses, which will allow the team from ProCurve Networking by HP to manage them centrally. The more than 700 PCs have been fired up and assigned to their switches, making each gaming station its own miniature network. Ben Van Kerkwyk, the lead engineer, said each switch will provide gamers with 1 gig speeds and localizing the network to each gaming table cuts down on hops, which could degrade performance, which in a gaming environment could be disastrous.

Crews laid down more cable, creating a maze of multi-colored wires streaming to and from all of the ports. Once cabling is complete, the network will be segmented into separate VLANs and subnets, making it easier to manage, Van Kerkwyk said. The ProCurve team will also make some sections of the gaming area wireless for VIPs and admins.

There is also an overflow of extras — two more core switches arrived today, and there are extra 2650 switches on hand in case something goes wrong.

“We have three core switches and 15 power supplies, so we’re good if something goes down,” Van Kerkwyk said.

Here’s a draft of what the network will look like upon completion: 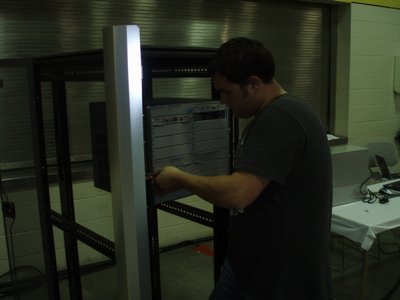