I’d like to share a piece from Kate Dostart, associate editor for the networking group. She wrote this for SearchMobileComputing.com’s newsletter, and I thought it might be of interest. Please feel free to post comments here or send them to Kate in an email. If you enjoy this post, I also recommend checking out Rob Beschizza’s blog post on Wired.com’s Gadget Lab: 7 jobs that Nokia’s phone of the future will be good for.

My drama with finding a new phone continues — in part because I’ve been hesitant to commit to a phone I don’t love, and in part because I’ve been told that my old dual analog-digital phone is going to be shut off soon, so now I must upgrade. Other than the expensive BlackBerry Pearl I wish I didn’t have to pay tons of money or renew my contract to get, I finally found the perfect device — well, maybe. And no, it’s not the tattoo phone! 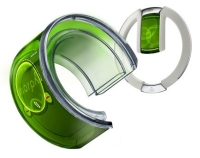 It’s Nokia’s new concept, the Morph. Maybe you’ve heard of it, maybe you haven’t. But this phone is amazing, and I’m in love. The only problem is, I’m eleven years too early for it.

Optimizing on nanotechnology, the device was first offered for viewing last month in conjunction with Museum of Modern Art’s “Design and the Elastic Mind” exhibition. The Morph bends, stretches, folds and twists — think Stretch Armstrong.

In addition to all that, this device will supposedly be the ultimate all-in-one-device. It can be shaped to fit your wrist like a watch or bracelet. Unfold it and it becomes a camera or, oddly enough, a device that can apparently detect whether your apple is at premium ripeness. (You can watch Nokia’s concept video on their site, or scroll down to view the short version below.)

The device is theoretically unbreakable and self-cleaning because of its use of nanotechnology. It’s also self-charging — simply having the device out in the sun, even if it’s in use, means its recharging as the entire device acts as a solar panel. That’s a convenient truth for anyone who hates to carry around extra batteries or cable wall re-chargers.

But outside how cool this future device is, one has to wonder, with mobile devices like BlackBerrys and Palms already so integral to so many people’s lives, what a device like this might mean to how everyone functions.

The iPhone is already disrupting trends with its crossover appeal to both the consumer and the business user. While phones specifically designed for children haven’t been much more than a niche market, would something like the Morph change that?

Could a device like the Morph become an integral element to our daily lives — a required device for school children, the ultimate clothing accessory for teenagers, the best business tool for the corporate worker and the most important device to pack for the traveler?

Nokia reports that the Morph, still more in the research rather than the development phase with full-time collaborating University of Cambridge researchers, is not expected to be ready for the market for another eleven years. So one wonders whether, by then, we’ll all just have microchips implanted into our wrists that can project holograms and do everything but the shape-shifting that the Morph is being designed to do.

But, if a cyborg comes back from eleven years in the future (though hopefully not after some Judgment Day) to save me from my own cell phone drama, I won’t turn down the Morph.