Every year at Cisco Live, the vendor’s giant annual customer conference, Cisco throws a big party for attendees. Last year the show was held in Orlando, and Cisco rented out a large portion of Universal Studios for the private party. Networking pros had the opportunity to try many of Universal’s rides for free, including Terminator 2: 3D Battle Across Time. The introductory video that plays before you enter the ride is an informecial for Cyberdine Systems, the fictional hi-tech company the developed Skynet, the evil defense network that exterminated the human race in the Terminator movies. Check out the video below.

The 200 or so network administrators I watched this with got quite a few chuckles from the video and commented on the parallels between Cyberdine and Cisco. Both companies are huge. Both are branching out into telepresence and collaboration technologies. And both are trying to market themselves to consumers. Several guys wondered aloud about whether Cisco realized just how closely the Cyberdine story seemed to echo Cisco’s real-life ambitions.

Indeed, Cisco is moving rapidly to establish itself as more than just the most dominant networking vendor in the world. It has explicitly stated its plans to conquer all segments of the IT industry. And it is also looking to expand into the highly competitive world of consumer electronics.

Cisco’s telepresence technologies have been marketed heavily to consumers. Last night I watched the rebroadcast of “24 Redemption,” the TV movie that bridges the gap between the last season of 24 and this upcoming season. As in past episodes, Fox has inserted some extremely heavy-handed product placements from Cisco. In a screen capture below, you can see the U.S. president clicking a button on a Cisco phone to open and close a telepresence session with the prime minister of a fictional African country. 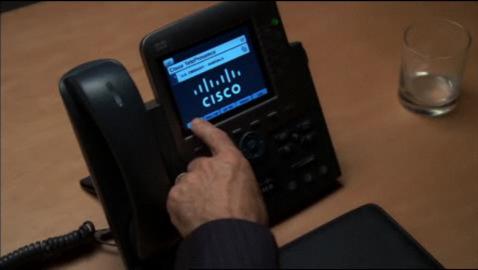 There are now rumors circulating that Cisco will launch blade servers in 2009, putting it in direct competition with Dell, IBM and HP in a completely new market full of IT decision-makers who have very likely never bought a Cisco product before.

And this month at the Consumer Electronics Show, Cisco will unveil a new line of consumer products, including a wireless digital stereo system and a set-top box for Internet video. Now Cisco will be competing with companies like Sony and Apple for consumers who have very likely never bought a Cisco product before.

Cisco CEO John Chambers once told a roomful of reporters that his company typically doesn’t enter a market unless executives believe they can build at least a $1 billion business within it. So clearly, Cisco is preparing to push quite a few resources into new markets that are quite distinct from the routers, switches and 802.11x access points that so many Cisco customers are familiar with.

This all begs a question: In these economic times, does Cisco have the go-to-market capability to succeed in these new markets while remaining strong in its traditional networking domain?