I recently visited the University of New Hampshire InterOperability Laboratory (UNH-IOL) for a behind-the-scenes tour. This 32,000-square-foot facility is the place where networking vendors large and small go in order to certify that their technologies interoperate with each other. The lab has more than 20 different testing programs which produce independent results via collaboration with networking and storage vendors. You name it, they test it: Etherent, IPv6, data center bridging, Fibre Channel, SATA, Wi-FI.

UNH-IOL is a neutral, third-party testing lab, staffed by engineers and UNH students. Each testing program the lab has in place corresponds to a consortium of vendors who support the lab’s activities in exchange for certification that their products interoperate with standards and with other vendors’ products.

It’s not just hardcore, behind-closed-door tests at UNH-IOL. The lab will also host multiple events throughout the year, such as “Plugfests,” group-testing events where multiple vendors will get together in a room full of tables and cables and test their equipment against each other for interoperability according to a specific testing plan. These plugfests consist of a week of 12-hour days of testing. In a world where vendors like to cut each other down in the press, it’s nice to think of them all sitting in a room together for hours at a time, sweating over who interoperates best with the competition.

All boxes big and small 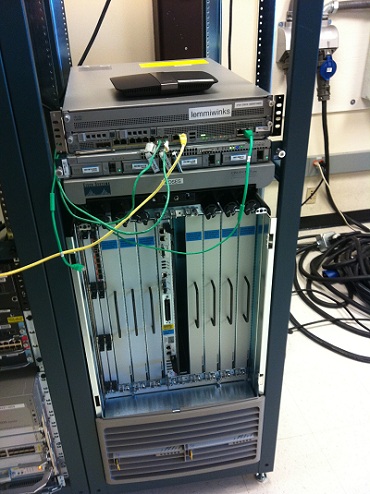 It’s not just the big enterprise and service provider gear that gets tested here. Home routers, hard drives and 3G dongles are tested, too.

“When building products, IPv6 can be complicated,” said Tim Winters, manager of IOL’s IPv6 testing lab. “These [vendors] need to talk to each other.”

The IPv6 testing lab at UNH-IOL has played an important role for vendors in recent years, especially those who are suppliers to the federal government, which has been extremely aggressive with deadlines for running native IPv6 on federal agencies’ networks.

The Racks of the living dead

Ethernet has been commercially available for more than 30 years now. In that time a lot of Ethernet vendors have come and gone, but a lot of their switches remain behind. Ethernet is still Ethernet. A vendor’s disappearance from the market doesn’t necessarily mean that it will disappear from every network. Somewhere out there, Compaq Fast Ethernet switches still lurk. And some network engineer, somewhere, is probably still proudly maintaining a few Bay Networks switches in a wiring closet. 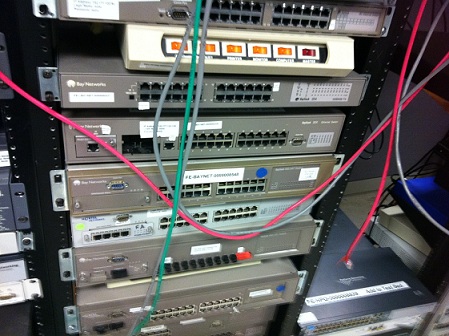 A stack of old Bay Networks switches, among other vendors

So here’s the thing. if you’re a vendor building a state-of-the-art switch, you still need to make sure it will interoperate with everything out there. You never know what zombie vendors lurk in your customer’s closets. For this reason, UNH-IOL maintains what I like to call “racks of the living dead,” old Ethernet switches that its Ethernet testing lab uses to test for interoperabiilty with everything. Above to the right you can see just a portion of one of the racks of old switches the UNH-IOL maintains, filled with several Bay Networks switches and a Nortel switch. To the right you’ll see a single Fast Ethernet HP ProCurve switch. Some of the vendors in this rack I had never heard of.

Jeff Lapak, manager of testing for 10, 40 and 100 Gigabit Ethernet (GbE) said UNH-IOL tests for more than just Ethernet interoperability in switches. His team will check voltages on individual ports or the PHY (physical layer) coding on each switch.

UNH-IOL engineers are always keeping an eye on the latest advances in the networking industry, developing testing programs for new technologies as products start to hit the market.

One trendy technology that could find its way into the UNH-IOL labs soon is OpenFlow, the open source protocol for software-defined networking that has enjoyed a lot of hype recently.

Winters said OpenFlow is still in it’s early stages and interoperabiity testing is not as important to vendors right now. Most early solutions are somewhat proprietary. he predicted that when enterprises start buying second-generation OpenFlow products, then they will start demanding interoperability from their vendors. That’s when testing will kick in.

Gigabit Wi-Fi? The same thing, Mikkel Hagen, who manages testing for Wi-Fi, among other technologies, said the next-generation Wi-Fi technologies which are just starting to come to market, are too new for UNH-IOL to have a testing program in place for it. Just one vendor has even chatted with the lab’s staff about the technology. And no enterprise-grade products are expected until the second half of 2012 or early 2013.