What is the difference between Internet Connection Sharing (ICS) and bridging between two NIC cards in XP?

Network bridging is a very interesting feature on Windows systems. With bridging, we now have the ability to "connect" (or ""bridge") different networking technologies such as a wired Ethernet segment and a wireless 802.11a/b/g segment.

Consider the following example: You have two floors at your office, each one with a wired Ethernet network and you require to connect them together without drilling holes through the walls and adding wireless access points in order to keep the budget as low as possible. 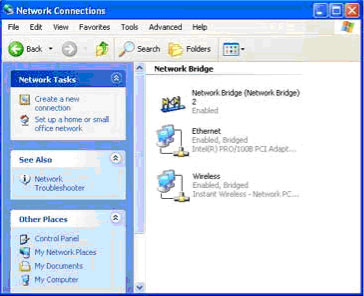 In our example, if the first office had an IP addressing scheme of 192.168.10.0/24, then the second one will have to follow the same network addressing. A bridge does not route packets between logical networks, but it simply connects them together, making them one larger network, therefore the same rules that apply for a single network would have to apply in a bridged network.

If you want to bridge two networks and also provide ICS services, then you'll need one additional network card on the network where the Internet service resides. 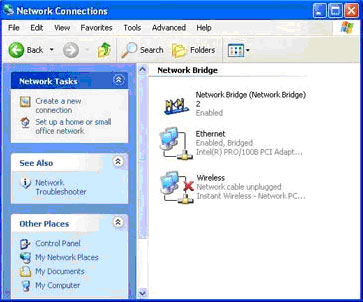 Lastly, you can also visit my website, www.firewall.cx and SearchNetworking.com's Cisco Spotlight Series on bridging networks and applications where you'll find plenty of information on how to bridge your networks.

What's the difference between half-duplex and full-duplex?

A half-duplex transmission could be considered a one-way street between sender and receiver. Full-duplex, on the other hand, enables two-way traffic ...  Continue Reading

What are SFP ports on a Gigabit switch and what are they used for?

SFP ports enable Gigabit switches to connect to a wide variety of fiber and Ethernet cables in order to extend switching functionality throughout the...  Continue Reading

What's the difference between a MAC address and IP address?

A MAC address and an IP address each identify network devices, but they do the job at different levels. Explore the differences between the two and ...  Continue Reading